Ice circles are a rare phenomena and when they are spotted, people jump at the opportunity to take pictures of the mysterious ice circle. They are seen in the form of ice disks spinning in circles on top of rivers in North America and Northern Europe and are sometimes as small as a CD or can be as much as 55 feet wide. The ice disks will be found floating on their own or many of them close by.

A study conducted by physicists from the University of Liége in Belgium found that this natural phenomena occurs when water gets warmer, the ice on top does not simply melt down or sink. The water under the disk then spirals in rotation and as the ice begins to rotate more and more, it begins to take the shape of a disk.

The discs are created when a large piece of ice breaks off in the river which in turn creates an effect called ‘rotational shear’, where the current slowly grinds away at the free-floating chunk until it is smoothed into a perfect circle. 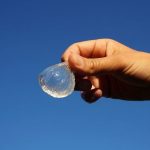