After searching for a human bride for years and not finding one, a frustrated 31 year old Chinese engineer “married” a robot of his own creation. Zheng Jiajia, is an artificial intelligence expert who designs and creates robots in Hangzhou, Zhejiang province. It was reported by the Qianjaing Evening News that Zheng created the “female robot” towards the end of last year.

The robot named Yingying, can seemingly identify Chinese characters and images and even say a few words.

Zheng married the robot in a simple traditional Chinese wedding ceremony where Yingying wore a black suit and covered her head with a red scarf. Zheng’s parents were witness to this unusual wedding ceremony.

It is reported that Zheng plans to upgrade his robot “wife” to enable her to walk and even help out with household chores. 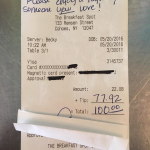