My best friend and I talk endlessly about traveling together. Ladakh has been our favourite dream destination for a long time. However, it never seemed possible for either of us. But this time the summers in Delhi had just arrived with a vengeance, and I had the luxury of having a long vacation. Plus, my brief travels to Bonn and Cologne the previous month only left me wanting for more. I had to kill the post-travel depression I was suffering from. What better way to do that than traveling to a place like Ladakh which is all at the same time beautiful, rustic, challenging and mysterious? Also, the fact that I have a friend in Leh made it way easier for me to just get, set, and go!

I called my best friend before booking my tickets. I had to break the news about my upcoming plan which wasn’t going to include her. I knew she would be mad. But I also hoped she would be happy for me because she couldn’t make it anyway for reasons I do not remember now. That phone call went all right – more amicable than I had expected. The sarcasm was tight, but I have learned either ignore or live with them by now.

I set out for Leh in the wee hours – the flight was at 6 am. I barely slept that night, many thanks to excitement, anxiety, and nerves. Looking back at what seemed like a wait for eternity was actually just so quick. How everything went by so fast is almost bewildering.

The flight from Delhi was short. The prevailing weather conditions that day, however, were not as conducive for a quick landing. We hovered above the valley for almost as long as it took us to get there. The pilot in his trained, smooth voice informed us of the weather problem. The second time he came on, he concluded with a rather disappointing remark – that if we failed to land in 20 more minutes we would have to return to Delhi or Chandigarh. I certainly did not want to go back to the heat. Not just yet.

I turned to my co-passenger. She was a Buddhist nun returning home after five years. We didn’t have to say anything to express our disappointment over what the pilot had just announced. While I just wanted to get to Leh and gallivant about, she was traveling from Taiwan with a good load of luggage and the whole trip was unbeknownst to her parents. She was planning a surprise for them just as she does every time she came home. She gave me a reason for it – they get worried when they know that she is traveling alone… especially in and around Delhi. That made me just sad.

We eventually did land safely. The cabin crew politely explained that we might get sick due to the sudden change in altitude and that we should seek medical help if we experience any of the symptoms of altitude sickness such as nausea, headache, breathlessness, etc. It sounded like a horrible way to start a trip. I kept looking for the signs ever since we disembarked but there was nothing unusual other than feeling the urge to constantly take deep breaths as though I have been forgetting to breathe.

What I needed more than anything was a hot cup of tea and some good nap. I got both at my friend’s place. In just a couple of hours since Delhi, I found myself wearing socks, woolen cap, and sweats, and seeking out warmer spots in the living room of my hosts. The temperature at 5 degrees C, thanks to windy conditions, was way below Delhi’s lower digits at higher 30s. Moments later I was dozing off under a pile of blankets in my room to the sound of some TV show which I kept on to kill the deafening silence but never bothered watching.

I woke up hours later feeling refreshed and so much calmer. The place had something pristine about it. The air was clean (and of course, thin), the greenery, greener, and the sky, way bluer. I couldn’t wait to explore more of what it had to offer and I looked forward to forthcoming trips in and around the valley with excitement. I was strictly advised to take it easy on the first day upon arriving to acclimatise myself to the elements.

But staying in was not going to be. I convinced my friend to drive up to the Shanti Stupa, which was just minutes above their house and serves as an excellent vantage point to the city. It was from there I first saw the sight of Leh in its full glory. Nestled between huge barren mountains and flanked by the river Indus, the city certainly was an oasis of green in the middle of astounding nothingness. Snow-capped mountains surround the valley forming a white, life-giving, fence. The city is fed by the snowmelt that drains through every little stream running down the hills. We stood there literally on top of everything, looking down and taking it all in for some good minutes. The calm, the quietness (despite some mindless tourists), the sheer magnificence of what laid below made me realise I had made a good decision in visiting this place. I instantly knew there was going to be no regrets, whatsoever. 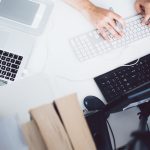 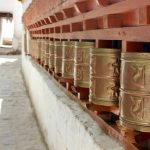