Ladakh travel series, this is form of blog to tell the amazing experience. The first thing one must learn on reaching Ladakh is to say “Jullay!” – the all-in-one greeting in Ladakhi. I have never come across a word as friendly, warm, efficient, and resourceful. It substitutes literally every greeting/pleasantry. Jullay is used to greet, thank, and bid goodbye. It was my host who taught me this magical word, a word which was very soon going to constantly bounce off my tongue and greet my way around just about anything during my travels here. I would do some small experiment – greet an unsuspecting passer-by with a cheerful “Jullay!” and watch the ice break faster than never before. It was indeed fascinating. People in the rural areas loved it even more… the way they responded to my perhaps slightly accented “Jullay” was certainly more heartfelt as one can tell from the little inflections they would add to the word.

I was supposed to still take it easy on the second day. Much as I wanted to explore the countryside of this mysterious land, I agreed to lay low and only stick to the areas nearby the main city. There were a bunch of places to visit in and around Leh itself. My friend, playing the dual role of the perfect host and genius travel guide, laid out a road map for us over breakfast. We were to travel west on the Leh-Srinagar highway up to the Alchi Monastery, which is home to some of the oldest monasteries in Ladakh. The ride was to have many interesting touristy stops along the way. While I appreciated and acknowledged the plan, I didn’t really care where we were to go because I knew so long as we were on the move it was going to be compelling anyway. I was just happy to be going somewhere, seeing new sights, and experiencing life in the Himalayas if only for a while.

The day turned out to be an absolute stunner. While the major stops were intriguing and in parts majestic, the route itself was completely breathtaking. The winding roads across vast barren plains, snow-covered hills lining the horizon, the endless clear blue sky, the sun brighter than ever through a scattering of whitest clouds – everything looked retouched but with just the right amount of edits. Experiencing it all was, of course, nothing short of sublime.

We stopped by at the little town of Nyoma to buy some refreshments for the remaining journey. True in the style of the local youth, the idea was to find a sweet little spot to picnic on along the way. So packed with snacks and some beers (Godfather in the bottle of Budweiser!) from a mobile accessories shop which they called PCO, we drove on to the next village where we found a nice little stream just above the highway. It was the perfect setting for an afternoon picnic. The beers, which weren’t chilled, found a nice place to chill in the crystal clear cold running stream. There was a makeshift faucet nearby, made out of a bamboo split supplying the original ‘Himalayan mineral water’. I gleefully partook in relishing some cool spring water after ages. Of course, it would have been way purer than the Bisleri bottles I consume in Delhi.

After spending about an hour just lazing on the grass, talking about nothing, and rejuvenating our spirits(!), we drove on. The views continued to overwhelm; I couldn’t help exclaiming until I could only muster a sigh. We stopped at the bridge before reaching the Alchi village. It was an ordinary iron bridge adorned with a thousand prayer flags fluttering in the wind. The river below was a different blue – turquoise to be precise, and was very strong on its course. The entire scene was the perfect Instagram picture of Ladakh which I had conjured up in my head way before traveling here. As I snapped a few pictures, more travelers started stopping, too. Two bikers in their full gears showed up and asked me to take pictures of them as they pretended to ride across the bridge. There was a young couple biking around Leh, too. Taking pictures of them (for them), I made sure I captured the undeniable young effervescent love that was between them. While I was happy to help everyone around, I couldn’t manage to make the insta-photo I had in mind. Nevermind, we moved on.

The Alchi monasteries were indeed very intriguing. The tiny doors through which one had to enter marked how old these structures were. Lugging my boots from one temple to another, I amazed at how ancient these buildings were. The fading murals on the earthen walls, the larger than life idols of the future Buddha, the ever-burning lamps, the maroon-robed monks – they all added up to a sense of tranquility you only find in holiest places. Also, it was here where I first experimented with the word Jullay. I only lamented my ignorance of the philosophy of Buddhism. It would certainly have been more enriching to be able to substantiate the practical sense-experience with a sound theoretical grounding. Again, nevermind. Will read up.

We had two stops on our way back – Nimmu which marks the confluence of the Indus and the Zanskar river, and the fabled Magnetic Hill. While there is no certainty as to why the magnetic hill behaves the way it does, it was an interesting to see how a car left in neutral gear gets pulled up the slope defying gravity! Nimmu, on the other hand, was an ideal location to watch the sunset… and finish the remaining beer if one has them. It was also a point of arrival for river rafters. As we sat on one of the many smooth table-like rocks on the bank of the confluence, there approached a boatload of rafters having completed what was presumably an exhilarating ride. At one glance I noticed that they were not very young. Looking closer, I could see that they must easily have been in their 50s or 60s. Respect, I thought, for the spirit, the zest, the energy they had which I couldn’t find in me. It was very cold in the valley, the chill in the wind was piercing through my jacket. I studied them walking gingerly towards the shore in their wetsuits. The closer they approached I could see their faces, and those were not happy ones. While I wasn’t sure if they were sad, one could see the angst that reflected in each one of them. Many had a hard time climbing up the steps to the rest stop. A couple literally clung on to each other trying not to fall. Everyone was shaking. I wondered why would they undertake such a grueling sport despite their physical conditions. My friend offered a very logical explanation: rafting must have been a part of the holiday package they had purchased, and surely will they go through with if even if it kills them! Well, it is all about getting your money’s worth, no?

The sun set on that amusing note that day. It was time to head home. Parents always call when children go out. And children always tell them they are on the way no matter how far away they are. With this familiar story lived out everywhere, my mind began to wander to what the next day would be like. I was to travel to Nubra valley and begin the solo leg of my trip. Settling in in the passenger seat of my friend’s car, I mused on as the massive mountains pass us by, reminding myself to be grateful for everything that has led up to that moment in time. 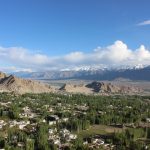 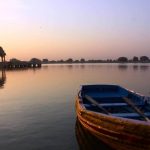