Ian Unger, a 6-year-old in Sand Lake, Michigan, was super excited for school and to hop onto the school bus with all his friends until he found out that he couldn’t do that because of his condition of Type 1 Diabetics. He was diagnosed when he was four.

The officials at Ian’s school thought that it would not be safe for Ian to ride the bus without an adult present to supervise his blood sugar. The school came up with the solution to pick Ian up on an empty bus at 8:45 AM, after all the other children had already been dropped off at school because thw school was not happy to provide an aide to ride with Ian and monitor his blood sugar.

“[The district doesn’t] feel like it’s safe for him to ride the bus without [another adult] on it,” Ian’s mother, Katrina Christensen, 38, told PEOPLE. “So, they were gonna pick him up on an empty school bus at 8:45 a.m. — school starts at 8:30 a.m. He just wants to be like everybody else … to put him on an empty bus is unfair.”

Ian’s family came up with a beautiful solution for this situation. They came up with a way that he could ride the bus with his classmates – they decided to get a diabetic alert dog for him.

Christensen shared that the service dog would be able to warn Ian when his blood sugar was getting too low, prompting the boy to take action by eating something sweet. However, an alert dog (along with training costs and other fees) would be at least $25,000.

“It was one of those things where, ‘Are we ever gonna have $25,000 to spend on a dog? Probably not.’ Ian wanted to start raising money, we talked about saving for it. We thought it would be three or four years before we raised the money,” Christensen says.

“He started wanting to do a lemonade stand, anything to raise the money. Then lemonade season was getting to be over, so we told Ian he could have the family’s pumpkin patch this year. He said, ‘I’m gonna sell pumpkins and I’m gonna get my dog!’”

So Ian’s family let him sell pumpkins at their annual sale. A stranger wrote a post about Ian’s efforts for fundraising, and his business suddenly started blooming. “He’s quite the little salesman,” Christensen says. “We had hundreds of people in the driveway. He helped every single person pick out the right pumpkin. It was the coolest thing to see.”

Just like that, Ian’s story went viral on social media and his mom decided to also set up a fundraiser on Facebook so that Ian can get his dog. Within a week’s time, the fundraiser had $24,890. Christensen said that Ian raised a little over $1,000 from selling pumpkins, and about $110 through selling the lemonade.

“He was super excited,” Christensen said. “He was just amazed that he was getting his dog.”

Ian will get his pooch in about 10 months, as there would be some training for the dog.

“Ian is an extremely happy kid and he always has been,” Christensen proudly said. “He always helps people. With diabetes, he’s taken it quite well. I’m very proud of him. He could be mad about it, but he’s not. He’s like, ‘This is how it is. This is what I have to do.’ And he just does it.”

Such a sweet story! 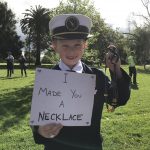 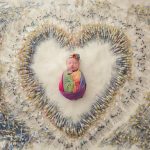